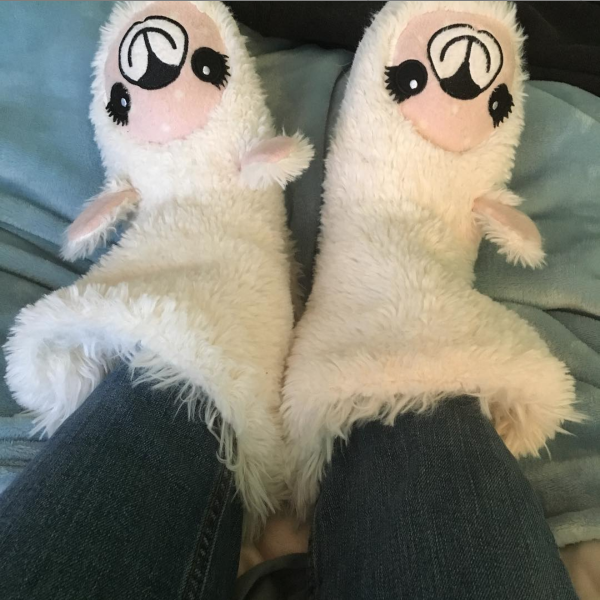 One unremarkable Saturday night in the Bethiverse…

I came to be standing in the middle of the street at 1:22 am in my polka-dot pajamas and one-eared llama slippers talking to three policemen. Not because I was in trouble or wandering aimlessly, but rather, because I was reading “All the Light We Cannot See” and couldn’t put it down. A sure sign of a good book, but If you’re wondering what that has to do with llama slippers, police, or anything else, I promise it’s central to this story.

So, there I was, reading in bed, swathed in my ridiculously cozy fluffy down comforter, blissfully immersed in a state of suspended reality, transported to a time before I was born. (Yes, Anthony Doerr’s bestselling novel really is that good.) I had the window cracked to let in the cool winter air and the only the sounds I heard were faintly chirping crickets (weird, I know, but Seattle is like that) and the intermittent croak of a bullfrog.

It was after midnight, which I wasn’t aware of until the roar of revving engines and high-pitched squeal of tires pierced my Zen bubble at 1:12 AM. A few seconds later, I realized that two cars were street racing nearby, which was crazy considering I was staying with friends in an upscale residential neighborhood. I’d only been there a couple of days, but from what I’d seen, their cul-de-sac and the surrounding area was home to a constant parade of little kids, old people, and dogs of all sizes, not illegal drag racers. Even fueled by testosterone, alcohol, and whatever else, their choice of venues was highly unusual. Being that most of the typical inhabitants were sleeping, their safety wasn’t really a concern, but losing my place on the page I was reading every time they screeched off their imaginary starting line was maddening.

Just as I reached the point of uttering four-letter words out loud, there was a deafening crunchy metallic “BOOM!!!” followed by…total silence. No engines, no racing sounds, no screams, no crickets, just an eerie nothingness. Under alternative circumstances, I would have been ecstatic and returned to my literary friends, Marie-Laure LeBlanc and Werner Pfenning. Unfortunately, for six long minutes, I waited to hear sirens instead.

When I didn’t hear them, it triggered two subsequent minutes of working things through in my brain: “Sigh…did I really just hear a car accident?” (Yep.) “Could I have imagined it?” (Nope.) “Dammit, now I have to get out of bed and go find the fucktards.” (Potty mouth, hello, Moral Compass, you are so inconvenient sometimes!) “No seriously, is there anything else that could’ve been?” (Zero chance.)

Full disclosure: For 15 pre-Moral Compass seconds, I debated, “If I just lay here, will this be like a Darwin Award that no one will ever know I knew about?” Not because I’m an asshole, but because experience has taught me that being the first one on the scene of an accident can be gnarly. So yeah, I was reluctant to make the shift from the beauty of “All the Light We Cannot See” to possible trauma with blood and broken things. My second thought was, “If so, would that make me a terrible human being and/or screw with my karma?” (Yes, and yes.)

Obviously, I got out of bed since I’m writing this, but it wasn’t my karma that ultimately prompted action, it was the thought of some random mom not knowing her kid was seriously injured and/or hanging upside down, trapped in a car in a suburban forest on a cold night without help on the way that flipped my adrenaline switch on. Because I’m a mom and someone intentionally not helping my kid when he was in distress would be unforgivable.

Since I was in an unfamiliar ‘hood, I Google-Mapped the street I thought the sound came from while putting on my down jacket and one-eared llama slippers, which had two prior to a canine casualty. Half telling myself I was being silly and half listening to my gut screaming at me, I got in my car and started driving into the cold night with directions pulled up on Volkswagen CarPlay. I was in for a big surprise though, because I barely drove 50 feet before encountering a slew of emergency vehicles blocking the way out of my friends’ cul-de-sac…talk about your “WTF” moments.

Which was how found myself talking to three very nice policemen in the middle of the night. (There were actually six, plus four firemen, but I didn’t, um, make the rounds.) I did pull over and park my car since I couldn’t see a way around the firetruck and police cars. Much to my surprise, the accident I was looking for was on the other side of them.

I started walking toward a group of officers, staring in awe at a totaled Toyota Camry (yes, someone was really racing a 4-door family sedan, haha) perched atop what remained of a chain-link fence. Its front end was bizarrely wrapped around a tree in the front yard of a house, and its side was wedged against a telephone pole. It defied the laws of physics, which, not gonna lie, fascinated my inner nerd.

When I finally reached where the police were standing, they said hello and I introduced myself…pj’s, one-eared llama slippers and all. I told them what I heard and asked them if they needed an ear-witness. They said the guy who lived in the house on the corner (who was also wearing pajamas) had already told them an identical version of events. Then they informed me that the driver fled. The. Driver. Fled. He crashed his car into a big ol’ maple tree and wedged it against a telephone pole on top of a chain-link fence, dropped to the ground, and ran away.

The passenger was also MIA and there was no sign of the second car, but the house on the corner guy heard it too, so there had definitely been one. I don’t care who you are or where you’re from, that is some crazy shit, people. I shook my head in disbelief and said, “Night guys, hope you find them quickly!”  as the llamas and I turned in the direction of home.

It took exactly 16 minutes from when I heard the crash to when I crawled back in bed. It felt like way longer than that. FYI, the police response time was less than 5 minutes, which was impressive. The takeaways: 1) Sound travels in strange ways in the wee hours of the night. 2) Nothing good happens after midnight. 3) Always listen to your gut, even when it’s really effing inconvenient. 4) Llama slippers with a missing ear are way low on the crazy scale of what first responders see on a regular basis, even at 1:22 in the morning. The craziest part may have been the fact that my friends and most of their neighbors slept through the entire thing.